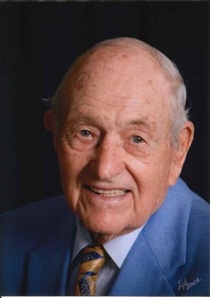 William “Bill” E. Eutsler, 96, died at home Saturday, February 14, 2015. Born in Raleigh, NC he was the son of the late Edward Miley and Nell Jordan Eutsler. He was the widower of Ann Watson Eutsler. He was a member of First United Methodist Church, Cheraw, a member of the Fred Harris Sunday School Class, and had served on numerous church committees, both as member and chairman.

Mr. Eutsler was a graduate of Whiteville High School and Wake Forest University, lettering in both football and baseball. He invested his life in the education and coaching of his students. During his career he served as the Head Coach and Athletic Director of Rockingham High School and Athletic Director of Richmond Sr. High School (1972-1980). Baseball 1947-1957, Basketball 1947-1952, Football 1940-1941, 1946-1972. The only time there was a gap in his coaching career was when he served as a Lt. JG in the US Navy during World War II (1941-1946). Coach Eutsler led his teams to many Regional and Conference Championships, one State Title in Baseball, four State and Co-State Titles in Football. He was inducted into the North Carolina Sports Hall of Fame (1992), Wake Forest Sports Hall of Fame (1977), and the North Carolina High School Athletic Association Hall of Fame (1990). He coached twice in both the Shrine Bowl and the North Carolina East-West games. In 1970 he was recognized by Wake Forest University as an “Outstanding Alumnus in the field of Education and Athletics.”

Mr. Eutsler was an avid bird hunter and a founding member of the Cheraw Chapter of Quail Unlimited. He enjoyed gardening and fishing. He was selected as the South Carolina Tree Farmer of the Year and was the first runner-up in the Southern Region in 1998.

He was preceded in death by his parents and wife listed above, also, a daughter, Jan Eutsler Smith, sisters, Sara E. Sledge and Nancy E. Kuykendall.

A funeral service will be held 3:00 PM, Tuesday, February 17, 2015 in the sanctuary of First United Methodist Church, Cheraw, SC. Burial with military honors will be in Chatham Hill Memorial Gardens.

To order memorial trees or send flowers to the family in memory of William "Bill" Eutsler, please visit our flower store.