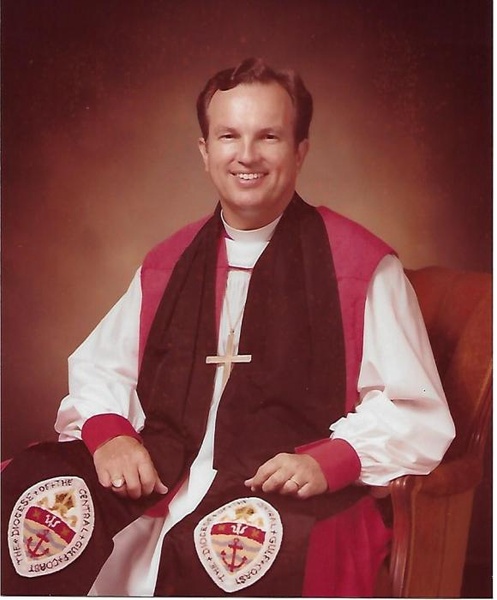 The Rt. Rev. Charles Farmer Duvall, retired bishop of the Episcopal Diocese of the Central Gulf Coast, died on October 8, 2020 in Columbia, SC.  Due to Coronavirus restrictions regarding inside services, a burial service will be held at graveside at Old St. David’s Episcopal Church in Cheraw, SC on Tuesday October 13, 2020 at 11:00 am.

Charles Farmer Duvall was born on November 18, 1935 in Cheraw, SC and was the second child of Henry Powe Duvall, III and Elizabeth Farmer Duvall.   His father was the third generation proprietor of the Cheraw Hardware & Supply Company.

After attending Cheraw public schools, Duvall graduated in 1957 from The Citadel, the Military College of South Carolina, where he was a member of the elite Summerall Guards and upon graduation was awarded with the prestigious Charles O. Willson Ring by his classmates.

Upon graduation from The Citadel, he was married to Ann Warren (Nancy) Rice of Charleston, SC before attending Virginia Theological Seminary where he graduated with a Master of Divinity in 1960.

Known as a storyteller, Duvall emphasized the teaching office of the bishop.  He recorded a series of ten Bible stories titled “Biblical Stories Retold to Tickle the Ear and Touch the Heart.”

Duvall had a lifelong connection with Kanuga Episcopal Camp and Conference Center in Hendersonville, NC.  He attended camp there as a boy, led youth conferences there early in his ministry, and as a Bishop was a popular chaplain for Summer Guest Periods for many years.  He served on the Kanuga Board of Visitors and was at one time Chairman of the Board of Directors.

Duvall served on numerous boards and received recognition for his accomplishments from many.  The School of Theology at the University of the South, where he served on the Board of Directors, and Virginia Theological Seminary both awarded him a Doctorate of Divinity.  He also served as the Chairman of the Board of Trustees for the Episcopal Media Center, which joined with Day 1 Ministry to become the Alliance for Christian Media during his tenure.  In addition, he served on the Board of Directors of St. George’s College in Jerusalem.

In lieu of flowers, memorials may be made to Kanuga Conference , Retreat, and Camp Center in Hendersonville, NC (https://www.kanuga.org/giving/)  or Harvest Hope Food Bank of Columbia, SC.

To order memorial trees or send flowers to the family in memory of The Rt. Rev. Charles Duvall, please visit our flower store.
Send a Sympathy Card