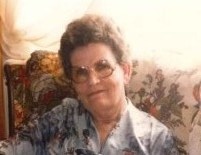 “God Bless Her Soul And Pray That She’s At Peace”

Ruth Elizabeth Turner, 96, died Sunday May 13, 2018. Born in Marlboro County June 1, 1921, she was a daughter of the late Frank Marvin and Delia Crouch Cranford, Sr., and was the widow of Belvin Turner. She was a member of Ebenezer United Methodist Church. In the past she was a member of the United Methodist Women and she enjoyed going with her group of friends to the local nursing homes and singing for the residents. She also enjoyed camping and going to gospel singing events in the mountains with her beloved husband.

In lieu of flowers, memorials may be made to Ebenezer United Methodist Church, c/o Gordon Chavis, P.O. Box 377, Wallace, SC 29596.

To order memorial trees or send flowers to the family in memory of Ruth Turner, please visit our flower store.