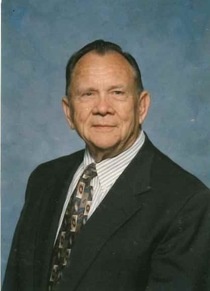 Reverend Edward Laney Davidson, 90, died Thursday, February 26, 2015 at his home surrounded by his family.  He was born in Cheraw, SC on September 9, 1924 to the late James Edward and the late Aline Laney Davidson.  He was a graduate of Wofford College in 1945 and received his Masters of Divinity Candler School of Theology Emory University 1948.

Ed served as an Annual Conference Trustee, was a member of the Boards of Missions, Evangelism, and Health and Welfare Ministries.  Ed was a Trustee of the James L. Belin Property, a Trustee of Columbia College (1982-1990), served on the District Committee for Ordained Ministry. Mentor of Candidates.  He was also named Pastor Emeritus at Bethel UMC, Bethune, Main Street UMC, Dillon, and Zoar UMC, Chesterfield.

He was an avid sportsman and outdoorsman who enjoyed baseball and football in his younger years as a player and continued to enjoy watching throughout his life.  He proudly played football and baseball for the Cheraw Braves and the Wofford Bulldogs.  He was a lifelong hunter and fisherman.  As a young man, he was known for his prowess as a quail hunter and would walk miles and miles certain the next covey was just around the bend.  His marksmanship allowed for little waste of shotgun shells.  He has three sets of antlers listed in the SC state record books for whitetail deer.

He enjoyed teaching younger generations to responsibly hunt and fish and encouraged their enjoyment of the outdoors. He mentored his children, grandchildren, nephews and great-grandson in the art of the proper cast and retrieval of a fishing line.

Ed was preceded in death by his beloved wife of 56 years, Ruth Watkins Davidson.  He is survived by his four children Ed, Jr. (Bettise) of Columbia, Tom of Cheraw, Susan of Ashburn, VA, and Marie of Columbia.  A sister, Margaret Davidson Baker of Bluffton, SC, and seven grandchildren, two great-grandsons and one great-granddaughter due next month, and six grand-dogs who will miss him dearly.  He is also survived by his brother-in –law, Dr. Curtis Watkins (Joyce), sister-in-law, Emily Watkins Best both of Camden, and numerous nieces and nephews who held him in highest esteem.

The family requests that all United Methodist ministers and their spouses serve as honorary pallbearers as well as members of Lynchwood Lodge 197.  The Tony Harris Sunday School class is asked to sit in the reserved area as well.

Memorials may be made to the Red Bird Mission, 70 Queensdale Center, Beverly, Kentucky, 40913-9607; to First United Methodist Church, Cheraw, SC, or to one of the congregations that Ed served during his 60+ year ministry, or to the charity of one’s choice.

The family wishes to thank friends and family for the ongoing support throughout Dad’s illness.  A special thank you to those friends who faithfully provided transportation to chemotherapy treatments.  Thank you to Dr. Rajesh Bajaj and his staff at McLeod Oncology for their excellent care that allowed us five quality years with Dad following his diagnosis of multiple myeloma.  Thank you to Dr. Alex Newsom and his staff at McLeod Cheraw Family Practice for their loving and attentive care.  We thank the Agape Hospice team for their loving care during the past months.  As very special thank you to hospice aide Marilyn Marshall who cared for Dad with such love and brought much comfort to him in his final days.

To order memorial trees or send flowers to the family in memory of Rev. Edward L. Davidson, please visit our flower store.