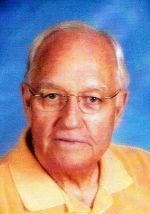 Raymond A. Cassidy , 75, died Sunday, February 17, 2013. Born in Cheraw, SC he was a son of the late Corbett Wilkes and Annie Mae Brock Cassidy. He was the widower of Ina Thompson Cassidy. Mr. "Raymond" was a beloved volunteer with Cheraw Primary School and enjoyed working with children concerning their reading development. He received the South Carolina Volunteer of the Year Award for he efforts in Education. He had been a past Scout Master. He had been a recipient of the Greater Cheraw Chamber of Commerce, Cheraw Citizens of the year award and the Rotary Volunteer of the Year Award. He was a member of First Baptist Church and had served as a deacon, trustee and Secretary/Treasurer of the Friendship Sunday School Class. He was a former member of First Presbyterian Church and Faith Presbyterian Church serving as an elder and deacon. He was retired from Marlboro Electric Cooperative as Comptroller.

To order memorial trees or send flowers to the family in memory of Raymond Cassidy, please visit our flower store.