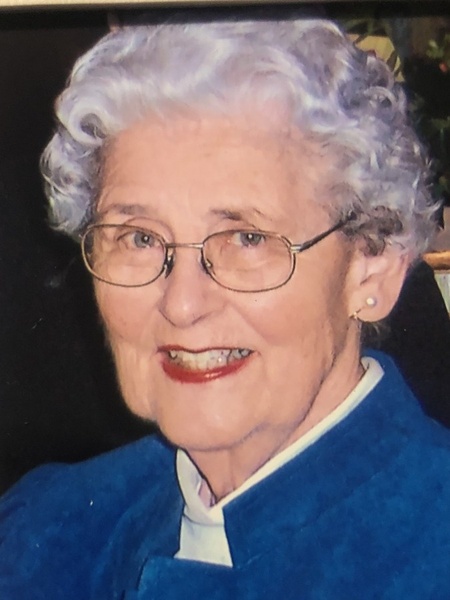 Margaret Thompson Thurman Wannamaker, died Tuesday, March 24, 2020.  Margie was born August 21, 1924 in Camden, SC, the daughter of Anne Kennedy de Loache and Rufus Randolph Thurman.  She was raised and spent most of her adult life in Cheraw, SC.  She was preceded in death by her husband of 62 years, James Henry Wannamaker, Jr.

Jim, her high school sweetheart, was serving in the Pacific Theater of WWII during her college years, but they corresponded regularly and when he wrote asking Margie to marry him when he got home, she said yes.  Her future father-in-law met her bus when she came home from college and gave her the engagement ring Jim had sent money for.  Margie and Jim were married January 9, 1946, four days after he returned from the war.

While raising three children, Margie continued to be very active in her beloved hometown.  She was the librarian at Cheraw Elementary for 25 years, ensuring that a generation of children found just the right book to instill a love of reading.  Students were spellbound when she told ghost stories and tales of early Cheraw history.  She was a member of Delta Kappa Gamma, an educational, honorary, and professional society.  Margie was a member of the First United Methodist Church, teaching Sunday school, serving as president of the Women of the Church, and on the Board of Trustees.

She was a member of the Old Cheraws Chapter of the DAR for 55 years, serving as regent and secretary, and receiving a national award for community service and for conservation.  Margie was very active in the effort to preserve Cheraw’s wonderful trees and the town’s designation as a Tree City.  She received a national award in recognition.  She was the district chairman of the Pee Dee Girl Scout Regional Council, and received the Mary Dean Brewer Woman of Achievement award.  Margie was the 2008 Cheraw Citizen of the Year.

One of her greatest loves was Old St. David’s Church and Cemetery.  Many generations of her family and Jim’s are buried there.  She was president of the cemetery association for many years and oversaw expansion and beautification of the grounds.

While Margie was a true southern lady, she did not aspire to be on a pedestal and could be often found digging in her flower garden at the home where generations of her family have lived.  She added many camellias, azaleas and daylilies over the years.

To order memorial trees or send flowers to the family in memory of Margaret Wannamaker, please visit our flower store.