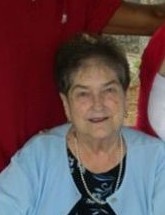 Linda Jo Boan Teal, 70, died Thursday, February 16, 2017. Born in Bennettsville, SC, she was a daughter of the late Curtis and Geneva Walters Boan. She was the widow of Jimmy Teal. Mrs. Teal was a member of Hickory Grove Baptist Church. She loved spending time with her family. She was retired from CitiTrends, where she was a manager for 40 years.

She was preceded in death by her husband and parents listed above, brothers, Curtis “Buck” Boan, David Boan, Bradford Boan and Ernest Boan, and a sister, Lorene Hayes.

A funeral service will be held 11:00 AM, Saturday, February 18, 2017 at Hickory Grove Baptist Church, Wallace, SC. Burial will follow in the church cemetery.

To order memorial trees or send flowers to the family in memory of Linda Jo Teal, please visit our flower store.