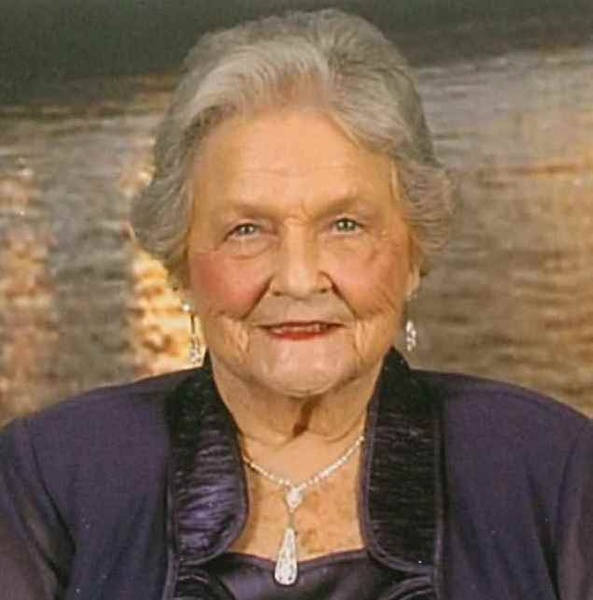 During her Senior year at Summerton High School, Mrs. Hodge was named the “Healthiest Girl in South Carolina” by the South Carolina State 4-H Club Federation (a fact she was often kidded about by her children) and represented South Carolina at the 1939 World’s Fair in Chicago. Mrs. Hodge attended Coker College before being called home, as the eldest child, to help with her family after her father’s untimely death in 1944. She worked in the war effort at Shaw Field and, in June, 1948, married Jay Earle Hodge, of Sumter, South Carolina, a student at the Medical University of South Carolina, Charleston. They met on a blind date while Dr. Hodge was a student at The Citadel. Dr. and Mrs. Hodge moved to Cheraw in 1948.

Mrs. Hodge was active in the First Baptist Church, serving as Director of the G.A.’s and as a Sunday School teacher. She was also active with the American Legion auxiliary, Civic League Garden Club, UDC, Girl Scouts, Cub Scouts and was known in her Community and Church for her ability as a cook. She was an instructor for several years in culinary and health classes at Northeastern Technical College, Cheraw. In 1972, Mrs. Hodge, who was always a campaigner for the Arts, founded the only chapter of the North Carolina Symphony outside of that State in Cheraw. A few husbands may remember, some with great ire, complying with their wives’ wishes to attend the orchestra’s performance on the small stage at the old Cheraw High School. Her children, who today all wish they had listened to their mother and Mrs. Covington, still cannot play the piano. Mrs. Hodge’s belief in the importance of music extended to her dedication to the Band Booster Club. Those who were members of the Cheraw High School Band in 1965 remember their invitation to and participation in one of the Mardi Gras Parades in New Orleans. Her son, Jay, is quick to tell people that he still won’t eat Krispy Kreme doughnuts after months of selling them to raise the money for the trip to New Orleans so long ago.

Cheraw in the late 1940’s and 1950’s was a different place and Mrs. Hodge was clearly a representative of those tough but rewarding years when family was important, doctors made house calls, life was simple and distant travel was usually just to Charlotte. It was a time when technology began to increase at lightning speed. Her oldest children remember the neighborhood gathering at their home on Sunday nights to watch the beginning of Bonanza on the new color television set, one of the first in Cheraw.  The family had an interesting and life-changing experience when they moved to Germany from 1957 to 1959, while Dr. Hodge fulfilled a military obligation. They attended school at a US Army base, but lived in a small town in southern Germany. The two older children remember piles of rubble left over from World War II that still existed in Germany in the late 1950’s.

Dr. Hodge died in 1980 and, while attending her 50th high school reunion, Mrs. Hodge became reacquainted with her high school boyfriend, Arthur Edward Hinson. They married a year later and enjoyed 16 years together before Mr. Hinson’s death in 2004. Mr. Hinson had been a POW in World War II and they enjoyed participating in POW meetings held around the country. They also traveled many times overseas, visiting Ireland, Scotland, England, and Greece. Mr. and Mrs. Hinson were members of St. David’s Episcopal Church and participated in many activities there during their years together.

In her later years, the Hodge family was extended to include Mrs. Gloria Curry and Gloria’s daughter, Mrs. Francine Hinson, who provided daily care and love to Mrs. Hodge. She enjoyed their many drives together. As she aged, Mrs. Hodge sometimes decided that she was going to drive to Summerton to see her mother. Gloria would drive her to Freeman’s Bakery in Florence, buy her something sweet, and they would return to Cheraw.

Mrs. Hodge was a gracious Southern lady who insisted that her children both knew and minded their manners, and who was always willing to give of her time and talent when and wherever needed. She was a fifth great grand-daughter of Revolutionary War General William Moultrie on her Brailsford side but few know of her connection. Mrs. Hodge believed that while family was important, the actions of the current generation were more important.

Mrs. Hodge was predeceased by her parents, her husbands and a brother, Thomas Richardson Brailsford.

In lieu of flowers, memorials may be made to the Cheraw Arts Commission, c/o Mrs. Lindsey Bennett, 200 Powe Street, Cheraw, SC 29520. Kiser Funeral Home is assisting the family with arrangements.

To order memorial trees or send flowers to the family in memory of Julia Hodge, please visit our flower store.
Send a Sympathy Card