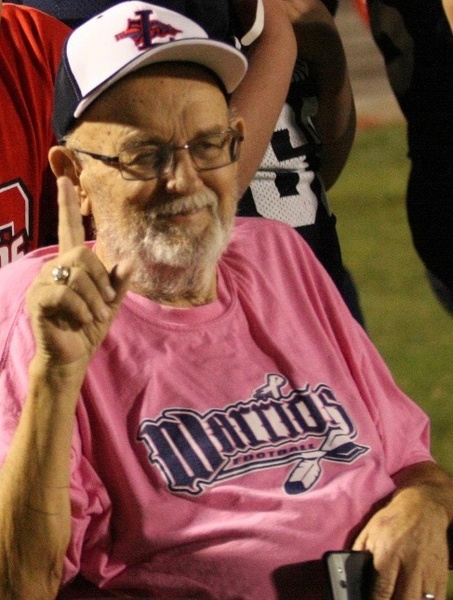 Jimmy Michael “Mickey” Workman, 75, died Wednesday, October 10, 2018. Born in Cheraw, SC he was the son of the late Jimmie and Ruth Lee Kelley Workman. Mickey retired as Post Master of the Blenheim, SC Post Office (1988-2000) with over 40+ years total in postal service. He was a US Air Force Veteran. He was a big part of “Nancy’s Kid’s”, assisting children in the community (especially during Christmas). Mickey had served on the Cheraw Town Council. The football field at Arrowhead Park is to be named in Mickey’s Honor.  He was named volunteer of the year (1981) with the Cheraw Parks and Recreation Department and that same year received the Jimmy Duffy Award. Mickey had worked with all youth sports in the town of Cheraw for over 60 years. In recent years he had been in charge of the concession stand at the park. He was President of the Cheraw Braves Booster Club 1973-1974. He was a graduate of Chesterfield-Marlboro Technical College with Associate Degrees in Industrial Management, General Business and Safety and Health Technician. He was a past recipient of the Civitan-Cheraw Citizen of the Year. Mickey was a member of North Cheraw Baptist Church where he had served as Chairman of the Deacons and Sunday School Teacher. He had been a member of the Cheraw Lions Club and was Lion of the year 1979-1980. He and his wife Nancy have been instrumental in teaching many young children in the area to swim and he was a vital part of the Special Needs Swim Program. He had received an Award from the South Carolina Department of Parks Recreation and Tourism for his work with youth and was part of the Governors Forum for Muscular Dystrophy.

A funeral service will be held 11:00 AM, Saturday, October, 13, 2018 at Westside Baptist Church, Cheraw, SC. Burial with military honors will be held in Chatham Hill Memorial Gardens.

To order memorial trees or send flowers to the family in memory of Jimmy Michael "Mickey" Workman, please visit our flower store.