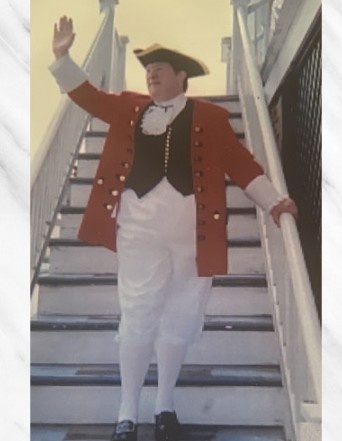 Born in Natchez, MS, he was the son of Mabel Kyle Coggins Foster of the home and the late James Herbert Foster.  He was a member of the First United Methodist Church of Cheraw where he served as an usher and worked with the annual men’s barbeque.  Jeffrey was a 1983 graduate of Cheraw High School.

Cheraw has lost its John Adams.  Every year, Jeffrey in full uniform, looked forward to greeting the crowds at the annual Fourth of July parade.  He was an avid historian of American History and United States Presidents.

Jeffrey took pride in working with his dad to restore a 1967 Mustang.  He and his dad won many trophies at various car shows throughout the Pee Dee area.

At McLeod Health and Fitness Center, Jeffrey excelled in swimming and became lifetime friends with many of the trainers.

Surviving are his mother, Mabel, of Cheraw, aunt and uncle, Virginia Coggins Trammell (Ed) of Spartanburg, and numerous cousins.

In lieu of flowers memorials may be made to First United Methodist Church of Cheraw Food Pantry, 117 Third Street, Cheraw, S.C.  29520.  Online condolences may be made at www.ParkerWhitePruitt.com

To order memorial trees or send flowers to the family in memory of Jeffrey Foster, please visit our flower store.