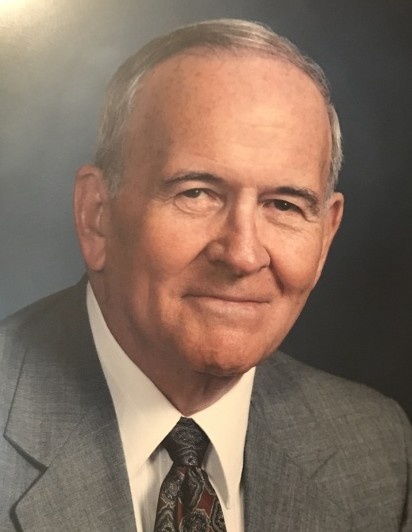 James F. “Pepper” Martin passed away peacefully at his home on Wednesday, June 28, 2017. Pepper was born on November 26, 1920 to the late James E. and Martha Benson Martin. Pepper married Nina Baker of Cheraw, SC on June 5, 1942. They recently celebrated their 75th wedding anniversary.

Pepper and Nina were inseparable and lived their Christian faith. Their love of family produced countless hours or laughter, community, grace, and faith. Pepper was an extraordinary athlete. Some of his accomplishments include being the captain of his 1936 National Championship, Spartanburg American Legion team. His athletic achievements continued at Furman University where he played football, basketball, and baseball, where he was captain of each his senior year. When not involved in the big three sports, he also participated in track, his events being the high hurdles and the pole vault. He would occasionally participate with the golf team. His senior year he was inducted into the Quaternion Club at Furman University.

In 1981 Pepper was inducted into the South Carolina Athletic Hall of Fame. In 1982 he was inducted into the Furman University Athletic Hall of Fame. David Shi, historian and former President of Furman University speculated that Pepper was “perhaps Furman’s finest athlete of all.” Dr. Shi went on to say “at 5 feet 7 inches tall and 140 pounds he was called the “mighty mite,” “sensational comet” and “purple flash…” Popular, studious and gracious, he was the model student athlete. He was one of the top scorers in the Southern Conference, which at the time included Clemson, South Carolina and North Carolina. Martin’s fabled exploits elicited colorful descriptions. “Tough as scrap iron and wiry as a steel spring”; “he is as elusive as a greasy pig at the county fair;” “and especially dexterous in escaping the clutches of a big man,” “A fierce competitor on the field, Martin was soft-spoken and humble once the game ended.”

Pepper’s promising baseball career with the Cincinnati Reds was disrupted when he joined the Navy during WWII. He served primarily in the European Theater and took part in the D-Day invasion. In the mid 1950’s he began work in the insurance business and ultimately ran his own agency. He obtained his “CLU” designation and continued his business into his mid ‘80s in Florence, SC, Pepper, Nina, and their children have wonderful memories and life-long friendships from living in Florence.

The family’s heartfelt thanks go to Open Arms Hospice for their care and to Synergy HomeCare, who provided sitters.

To order memorial trees or send flowers to the family in memory of James Martin, please visit our flower store.
Send a Sympathy Card