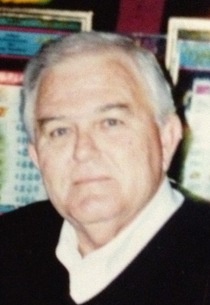 Jack Moore Mangum, 77,  passed away peacefully with his family by his side holding his hands on December 24, 2014 after battling a heart condition and advanced Alzheimer's Disease.  Jack was born in Pageland, South Carolina to the late Carroll Thomas Mangum and Mary Nelle Moore Mangum.  He grew up in Pageland, SC and graduated from Pageland High School in 1955. After graduating high school, he attended Wake Forest University where he was a member of the Pi Kappa Alpha fraternity and a member of the swim team and graduated as a die hard "Demon Deacon" in 1960 with a BA degree in Business Administration. Upon graduating from Wake Forest University, he began his life-long career as an executive men's retail clothing buyer with B.C. Moore and Sons.  He met his wife, Ann Faile Mangum, in the summer of 1962.  Jack was having lunch in a soda shop in Lancaster, S.C. when he saw Ann Faile walking down the sidewalk and turned to his lunch buddies and said "I'm going to marry that beautiful woman." He quickly left the soda shop and ran down the sidewalk to meet her and asked her out on a date. After only months of courtship, Jack and Ann married on October 5, 1962.  They had two children, John Albert Mangum and Wendi Welsh Mangum. What defined Jack's life was his relationship with Ann, John “Ab”, Wendi, family and friends. He was also a man of strong faith.  He always encouraged his family to make the most of life and make every day count. Some of his best days in life were traveling with his family on beach trips, taking Ann to New York and Las Vegas on business trips, going on extravagant hunting trips with Ab and friends and attending Father/Daughter dances with Wendi at Columbia College. Jack had a variety of interests in his life including being a Mason and Shriner, an honorary Deacon in the First Baptist Church of Cheraw, SC and serving on the YMCA Board of Directors in Chesterfield, SC. He was an avid Quail hunter, loved the outdoors and called "Mango" by many friends. He enjoyed playing in tennis tournaments with Ann and his friends at The Cheraw Country Club. He was a member of Quails Unlimited and Ducks Unlimited.  He and his son, John “Ab”, hosted opening dove season at the farm in Flat Creek, which became a yearly tradition commonly referred to as "If it flies, it dies." Jack was also the proud founder and owner of Papa John's Christmas Tree Farm named after Ann's father, John B. Faile, whom John “Ab” and Wendi called "Papa John." Without a doubt, the characteristics for which Jack will always be remembered by family, friends and colleagues were his sense of humor, extraordinary people skills, love of the outdoors and as a man of strong Christian faith. Jack is survived by his wife, Ann Faile Mangum, his son John Albert Mangum and daughter-in-law Stephanie Vincent Mangum, his daughter Wendi Bridgers Wood and his son-in-law James F Wood, III, his three precious grandchildren, Allison "Taylor" Bridgers, Summer Ann Mangum and John "Cord" Mangum, his sister Mary Carroll Reed and his brother-in-law Robert Reed and his 2 nephews and four nieces. The lives of Jack's family, friends and community were made richer for Jack's life among us as a dedicated husband, father, grandfather, uncle, businessman and friend.  His  memorial service will be held at the First Baptist Church in Cheraw, S.C. on Sunday, December 28, 2014 at 2:00 p.m. and conducted by Dr. Carey Hedgpeth. Visitation will follow the service. In lieu of flowers, donations can be made to the Alzheimer's Foundation of America at www.alzfdn.org or the First Baptist Church of Cheraw, S.C. Visit Kiserfuneralhome.com to send an e-condolence.

To order memorial trees or send flowers to the family in memory of Jack Mangum, please visit our flower store.