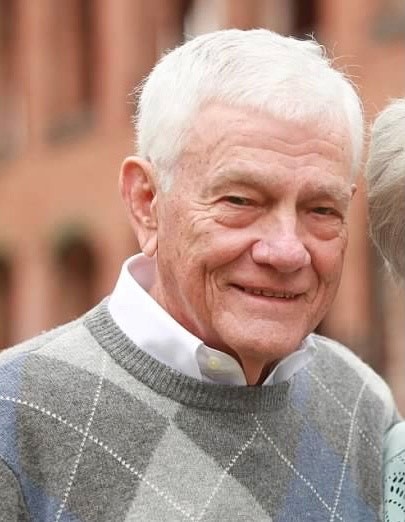 If you played golf in Cheraw over the past 30 years, you probably met Clyde Cobb at Cheraw Country Club.  He was a supportive husband and father, avid golfer, outdoorsman, devoted fan of his beloved Tarheels and a member of the Cheraw community for over 50 years.

Born on September 20, 1936 in Kings Mountain, North Carolina, Clyde Landon Cobb was the son of Ella Beulah Carroll and Eustis Dewitt Cobb.  He was the fourth of their five children.  Clyde was no stranger to hard work and joined the United States Air Force which provided a means for him to eventually attend the University of North Carolina at Chapel Hill, where he became one of their most passionate fans.  The color Carolina Blue was a constant reminder of his devotion whether it was his clothing, his cars over the years, carpet in his home or his golf equipment.  He loved to attend basketball and football games with his family where he would loudly cheer “Go Heels”!  He created great memories over the many years at football games that he shared with his wife, children and grandchildren.

Clyde met Marcia Herring after college and they were married in Snow Hill, North Carolina on December 10, 1966.  After their wedding, they lived in Charlotte, North Carolina where Clyde worked at an accounting firm, later joining Delmar as their Assistant Controller.  In 1970, Clyde was presented with an opportunity to join Carolina Canners as their Controller, and they moved to Cheraw, South Carolina where they built their family home.  Soon after the move, they had their first son, Clyde (Landon) Cobb, Jr., in 1971.  They later welcomed a second son, Cameron Patrick Cobb, in 1972.  Clyde worked for Carolina Canners for 35 years, eventually attaining the role of Chief Financial Officer & Treasurer.  When Clyde joined Carolina Canners, he not only joined a great company but also a great family.  He developed lifelong friends while working there. All of the families and children of his co-workers grew up together attending annual holiday parties and family days, always with a large supply of Pepsi to enjoy!

Clyde shared his passion of the outdoors with his children, especially fishing and camping.  Many trips were taken in a pop-up camper during their childhood, with Marcia patiently supporting him.  He was also always present to watch his children play sporting events.  He developed his passion for golf in his forties when his son, Landon, expressed interest in learning how to play the sport.  They learned it together, and it became an activity they shared together for decades.  Later, Cameron learned to play which added to the enjoyment of this sport with his family.

Clyde was preceded in death by his older brother, Bill Cobb, and younger brother, Jack Cobb.  In addition to his wife of 54 years, Marcia, and sons, Landon and Cameron, Clyde’s life will be forever cherished by his older sisters Geraldine Hullender of Atlanta, Georgia and Marie Ling of Englewood, Florida; his daughter-in-law Annette Green Cobb (Landon) and grandchildren Preston, Chandler and Ella Cobb of Marietta, Georgia; his daughter-in-law Natasha Nix Cobb (Cameron) and grandchildren Patrick and Sydney Cobb of Winston-Salem, North Carolina; and numerous nieces and nephews.


In the last several years, though his health was compromised after being diagnosed with dementia and Parkinson’s disease, Clyde remained strong of mind and spirit.  Marcia was a devoted wife and supported him daily, which was especially difficult in the last years of his life as his condition worsened.

A visitation will be held from 10:00 AM to 11:30 AM Saturday, November 13, 2021 at Kiser Funeral Home followed by a private graveside burial service at Chatham Hill Memorial Gardens in Cheraw, South Carolina.

In lieu of flowers, please make a contribution to Hospice of Chesterfield County Foundation, P.O. Box 293, Chesterfield, SC 29709 or a charity of your choice.

Online Condolences may be made at www.kiserfuneralhome.com.

To order memorial trees or send flowers to the family in memory of Clyde Cobb, please visit our flower store.