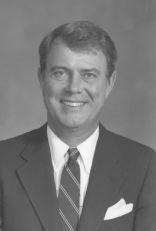 
Mr. Jackson grew up in Cheraw, SC. He graduated from Cheraw High School in 1955 and the University of South Carolina in 1959, where he was a member of Kappa Alpha fraternity. He served with the Air National Guard from 1959 until 1964, including a year of active duty in the United States Air Force from 1961 through 1962.

Mr. Jackson was active in civic affairs in Cheraw and was a past president of Cheraw Chamber of Commerce, Cheraw Kiwanis Club, and Cheraw United Fund. He was elected mayor of Cheraw in 1973 to fill an unexpired term of Mayor Miller S. Ingram, Sr. Mr. Jackson was re-elected to a full term two years later and served as mayor until 1980.

The family will receive friends on Monday evening, January 8th from four until six o’clock at the Guignard Mansion at Still Hopes. Memorial services for Mr. Jackson will be held on Tuesday, January 9th at three o’clock at Trinity Episcopal Cathedral, Columbia, SC. A graveside burial service will be held in Cheraw, SC at Old Saint David’s Episcopal Church Cemetery on Wednesday, January 10th at two o’clock.

To order memorial trees or send flowers to the family in memory of Charles Reid Jackson, Sr., please visit our flower store.